FORBES: Will a quantum computer become a curse of cryptocurrency?

Theoretical foundations of quantum computers were described in the 1980s of the last century. It is only recently that technology has caught up with theory, allowing it to build the first quantum computers. Will their appearance cause the blockchain to become obsolete?

An unquestionable pioneer of technology behind quantum computers is the Canadian company D-Wave Systems. Its clients include both government agencies such as CIA, NSA, science centers, NASA, as well as commercial entities, such as Google and Lockheed Martin – you can read on their website. The European Union also intends to spend a billion euros on similar research. Technological companies develop their own technologies, seeing the wide applications for huge powers dormant in calculations based on quanta, the basic particles from which our world is built.

The electrons are too crowded. Moore’s Law

Why is this technology so breakthrough? Modern processors consist of billions of transistors of several nanometers, grouped on a very small surface. According to Moore’s law, the number of transistors in the microprocessor doubles every two years or so. Unfortunately, the increase in computing power in processors is constantly slowing down. We achieve technological boundaries in the possibilities of “packing” more and more transistors on such small surfaces. The limit, which can not be physically crossed, is a single-atom size transistor and a single electron used to switch its state from 0 to 1.

Technology from a cold vacuum

The advantages of a quantum computer can be shown simply by comparing it to a traditional computer. The device, which we know from everyday work, performs all operations, using basic IT units such as bits. And these can in principle only represent two states: 0 and 1.

In the case of a quantum computer, we talk about the use of an intermediate state, i.e. going beyond the scheme of two opposite values. Kubit (from quantum bits) – because it is called a unit of quantum devices – can simultaneously take the value of 0 and 1, and exactly can take an infinite number of states between 0 and 1. This state is called a superposition. Only when checking the value of qubit, it takes one of two basic states – 0 or 1. 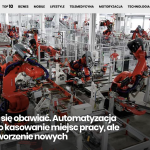 There is nothing to be afraid of. Automation is not just... Previous
Business Insider: Ledger of all ledgers. This is what... Next