Atos Poland: We increase employment, extend the offer and scale of operations

ITwiz. Interview with Norbert Biedrzycki, new President of the Management Board at Atos Poland and Vice President System Integration for CEE Region at Atos.

Interview with Norbert Biedrzycki, new President of the Management Board at Atos Poland and Vice President System Integration for CEE Region at Atos. We talk about offer development, entering new markets of public administration and energy and utilities, growing potential of Atos in our country and international projects run by Polish specialists.

iTwiz: We meet at Smart City Forum, a conference where you had speech on solutions for smart cities. It shows that Atos Poland is interested in running the projects not only in Poland.

We take part in the tender for development of smart city solutions for the city of Singapore. We already used to run such projects for public administration in Dubai and Eindhoven, as well as for Polish cities – Gdańsk, Cracow and Poznań. In Łódź we implemented the first in Poland system of intelligent street lightning. In Podkarpacie region we realized the biggest project of e-administration in the country. It covered 160 local government entities.

Polish branch of Atos is unique, because only here and in India we work for international customers. Due to this fact, Atos in Poland is one of the biggest IT organizations, employing 4500 people in two companies. And we keep hiring even more. Atos it is the people who work here.

iTwiz: What is the reason of such a rapid increase of the number of employees in Poland?

20 years ago international companies while looking for savings, were moving part of their tasks within offshoring to the countries with cheap labour forces, like for example to India. Now we can observe reverse of this trend. The reasons are various – searching for higher quality, lower price differences, legal EU requirements, problems related with time zones. It is in favour of Poland, which is becoming nearshore center for Europe. Another important thing is proximity – we can get to Berlin in few hours time only.

From Poland we run for example the projects for telecom companies in Brasil, we implement SAP solutions in Germany. It happens, because our employees are skilled to do so – their expertise is sufficient for German companies to hire them to implement solutions built in their own country.

iTwiz: Atos it is 12 billions Euro of revenue and 110 thousand employees in 72 countries…

… and more than 500 million Euro in cash for acquisitions, both worldwide and in Poland. In 2015 we finalized the merger with Bull Polska and AMG.net. In the world, few months later, we took over a part of Xerox responsible for outsourcing services and we purchased Unify from Gores Group and Siemens. All these companies are present in Poland as well.

Atos has aspirations to integrate most significant players in the market, both in terms of technology, customers and competencies. As a result we have an access to most modern technology and service models. It concerns not only system integration, but also development of custom software, IT project financing or services such as outsourcing.

Everyone knows Polish integrators, meanwhile through acquisitions and construction of Global Delivery Center, suddenly in Poland grown up a big company providing services of such type with global experience, which can be implemented by Polish employees on our local area.

iTwiz: There are three business lines in Atos – except for Consulting & System Integration there is also Big Data and Managed Services…

In Poland so far we used to offer first of all integration services, competing with companies as Asseco Poland or Sygnity. We keep developing our offer of two remaining divisions, though. For example, Big Data & Security at Atos Poland is basing on infrastructure solutions in the offer of former Bull Polska.

My role, as Vice President System Integration for Central and Eastern Europe, definitely helps us to make use of Atos’ global experience.

iTwiz: What are the plans of Atos Poland for the next 12 months? How is its offer going to change? What kind of solutions you would like to put the biggest emphasis on?

In Poland we are the strongest in two sectors – telecommunication as well as banking and finance. Worldwide there are also public and industry sectors, including utilities. Also here in Poland we start offering solutions for these two sectors. New strategy applies not only to our country, but also to the markets of all the countries of Central and Eastern Europe.

In the offer for power plants we have for example billing systems, renovation systems basing on GIS class solutions or management systems for distributed energy sources. For industry sector on the other hand, we offer ERP systems and production management solutions – from planning stage to the final product one, together with integrated chain of supplies. This is important, as the time between placing order and delivery shortens more and more, also in the factories. For example in Toyota factories supplies are kept on such a low level, that if one of suppliers stops the production, then entire car factory will stop the production within 8 hours due to lack of parts.

In public sector, on the other hand, we offer Smart City solutions, such as public transport management, including sale of tickets and urban travel cards. An example of such project run by Atos Poland can be implementation of Małopolska Aglomeration Card. It combines two different functions. From one hand it allows to move with railway transport beyond city boarders and with public transportation within city of Cracow, from the other hand, it secures place on suburban parkings. Another innovative project of similar scale is Poznań City Card realized by us. In Gdańsk we implemented a solution, which enables car sharing. The project concerns electric cars sharing. We are still in its pilot stage, but it shows how deeply we enter into new areas and sectors. 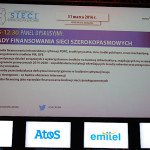