Computerworld TOP200: The most influential people in the Polish IT

Hostile takeover by major competitor is a theoretical exercise many CEOs of listed companies will never face in a real life, and not everyone is experiencing it firsthand.

The importance of people cannot be easily measured. Cannot be measured with money. Arranging a list of the most influential people in the industry we were trying to be subjective, but tried also to make it as it was a collective subjectivity. The question of the people with the greatest influence we asked these individuals who for years are in the centre of what is happening in the Polish IT world. So the result is the statement – fifty people who decide about the market. Then we ranked the top ten after the other, the other – alphabetically by name.

Hostile takeover by major competitor is a theoretical exercise many CEOs of listed companies will never face in a real life, and not everyone is experiencing it firsthand. “Could not refuse” type of offer submitted by the President of Asseco, major competitor of Mr. Biedrzycki, other CEO’s could potentially cause a heart attack or at least make them jobless. Norbert Biedrzycki defending the company has shown that it is a tough fighter able to drive the team in difficult times. 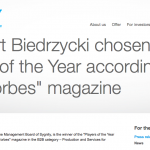 Norbert Biedrzycki chosen the Player of the Year according... Previous
IT distribution Central Eastern Europe market evolution... Next 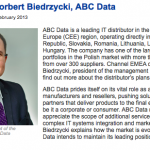 Matrix, Dolly the Sheep and bacteria of the future

I make an effort to stay abreast of the latest developments in science, especially where biological research combines with information technology. Some ideas in particular prove to be quite an intellectual adventure.