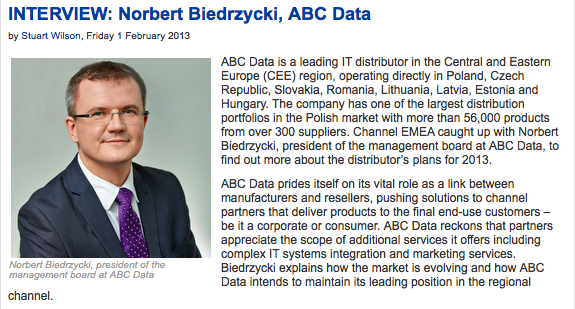 ABC Data is a leading IT distributor in the Central and Eastern Europe (CEE) region, operating directly in Poland, Czech Republic, Slovakia, Romania, Lithuania, Latvia, Estonia and Hungary. The company has one of the largest distribution portfolios in the Polish market with more than 56,000 products from over 300 suppliers. Channel EMEA caught up with Norbert Biedrzycki, president of the management board at ABC Data, to find out more about the distributor’s plans for 2013.

ABC Data prides itself on its vital role as a link between manufacturers and resellers, pushing solutions to channel partners that deliver products to the final end-use customers – be it a corporate or consumer. ABC Data reckons that partners appreciate the scope of additional services it offers including complex IT systems integration and marketing services. Biedrzycki explains how the market is evolving and how ABC Data intends to maintain its leading position in the regional channel.

Channel EMEA (CE): What have been the major internal developments and milestones at ABC Data in the last year?

Norbert Biedrzycki (NB): ABC Data has strengthened its position in foreign markets as we consistently implement our development strategy. We have registered three quarters of double-digit growth, thanks to a broad and constantly evolving product portfolio, as well as a very good understanding of the specifics of the markets we operate in. ABC Data has increased the effectiveness of its logistics processes and searched for those areas where we can achieve the added value so appreciated by our business partners.

One of our goals is to process all orders online. ABC Data’s competitive advantage is based on InterLink, a sales platform through which we handle about 90% of our online orders. This will be be further developed and improved by adding new functionalities. In the last year we introduced ABC Data Marketing, a subsidiary which offers comprehensive marketing services to ABC Data and its customers – over 300 vendors now.

Colorovo, the company’s own brand, also continues to develop dynamically. In November 2012, Colorovo made its debut in the consumer electronics sector with its multifunctional tablet, CityTab. In terms of finance, during the first three quarters of 2012, ABC Data generated revenues of US$780m, an increase of 24.6% year-on-year. The company is constantly developing its export sales and currently reaches 30 countries.

ABC Data has a development strategy based on organic expansion into further markets. The company has significantly increased sales in the Baltics, where it has maintained high margins. The third quarter of 2012 saw the beginning of preparations for entering the Hungarian market. A subsidiary, ABC Data Hungary, was established and commenced sales in November. This is yet another market where ABC Data now carries out direct sales activities. Our experience in geographic expansion has allowed us to develop a concise, repeatable and low-cost model for development in further markets.

CE: What do you expect to see in terms of distributor consolidation in the next 12 months?

NB: The last year has shown that success in IT distribution requires a high degree of business flexibility and coming up with competitive advantages to increase market share. Forecasts for 2012 were alarming, but for the second year in a row the biggest distributors – such as ABC Data – recorded constant growth. In subsequent quarters we increased our revenue at double-digit rates while the overall market growth was estimated at between 4% and 5%. We expect to witness further consolidation in the IT distribution market around the major players spurred by the continuing economic slowdown. This situation is a unique opportunity for major players, such as ABC Data because we have solid foundations and are resistant to market fluctuations. We can provide not only products, but also a selection of customised services including IT consulting, training, advice on sales and marketing strategies plus active channel support.

CE: What new services can we expect to see from ABC Data moving forward? What more can you offer to vendors and resellers?

NB: ABC Data’s goal is to offer comprehensive distribution, stepping outside the framework of traditional sales of IT hardware. I see the development of the company in three dimensions. Each of them, in my opinion, is crucial for the dynamic growth in our results. We want to use our perfected logistics mechanisms to improve collaboration with our partners, to whom we can offer integration in this field. The second dimension in which the company should use its competence is in the organic expansion into further markets. We are interested in markets with lower IT saturation as well as areas with the highest spending in this segment. ABC Data is the only Polish IT distributor realising a strategy aimed at direct presence in markets. The third aspect we intend to focus on is the expansion of the existing sales channels. We will be reinforcing the fast-evolving e-commerce segment while considering various forms of cooperation in the retail segment.

The region of CEE where ABC Data operates is growing. The development of the IT sector in all the CEE countries will be almost twice as fast as growth of their GDP from both a medium and long term perspective. This is a result of, among other things, EU cohesion funds accelerating the implementation of national IT projects. Gartner analysts predict that in 2013 the IT sector should see higher sales growth. Market drivers will be advanced mobile solutions and mobile devices becoming the most popular internet platform. IDC forecasts that segment revenues from mobile solutions in 2013 will exceed 20% of the IT market.

The variety of mobile devices available on the market forces us – as a distributor- to constantly expand our product portfolio, to include both the most innovative solutions and the most popular products. In the coming months, the IT distribution market will be dominated by mobile devices such as tablets and smartphones.

Our priority is to maintain margins and try and increase them, both by cutting costs and by boosting the sales of the more profitable products, which we can achieve through the development of the Colorovo brand for example. Our presence in new markets, such as the Baltics leads to higher margins as well. ABC Data’s solid foundations, our strong position based on more than 20 years of experience, the introduction of new products and expansion of our distribution channels – all this permits dynamic growth even in a period when the IT distribution market is becoming increasingly demanding.

CE: What are the biggest challenges facing the distribution channel at present?

NB: In 2013 the optimal business strategy for distributors will involve even closer cooperation with the e-commerce channel. Our partners working in this business model want to focus on their core business, which is the use of the web traffic to generate higher revenues and margins. That is why distributors are expected to provide comprehensive logistics and administrative support, warehouse management and most importantly access to the largest product offering.

A competitive advantage can be built on further improvements in logistics services for online orders. Our logistics capability enables us to deliver products in 24 hours. ABC Data, cooperates with 16,000 resellers, has proven business-to-business systems including InterLink, BiznesLink – a system dedicated to support corporate clients sales. We also have business-to-consumer systems such as Reseller Web and XML Gateway, which enable us to offer drop shipping and complete goods delivery to the end-user without needing to use a partner’s warehouse. These applications designed for ABC Data partners support e-commerce processes, and fit very well with the market changes.

Margin deterioration and increasing competition is forcing IT distributors to continue the development of more profitable products under their own brand – like Colorovo by ABC Data. It also creates the need for us to introduce higher margin product groups outside our main portfolio. In addition to adding new products we see opportunities in geographical expansion and we see potential outside the CEE region. We have already noticed a channel shift from retail to e-tail. ABC Data, as a supplier to e-tailers, will offer outsourced logistics and IT services to internet stores.

Computerworld TOP200: The most influential people in... Previous
Key achievements in Sygnity 2010-2012 Next

Today’s investor relies on a traditional system of buying, selling and accounting for transactions that are old enough to be called ossified. The system generates considerable costs and adds to the time needed to close transactions. This is because trading in financial assets requires multiple entities arranged in a complex web of intermediaries, settlement systems and business partners.