Blockchain poised to shake up our lives

As we know, the Internet changed the world profoundly and, considering how fast it happened, dramatically. Now, there is another big breakthrough coming fast around the corner: blockchain. It has a potential to become a universal tool offering useful applications to just about every industry and sector. 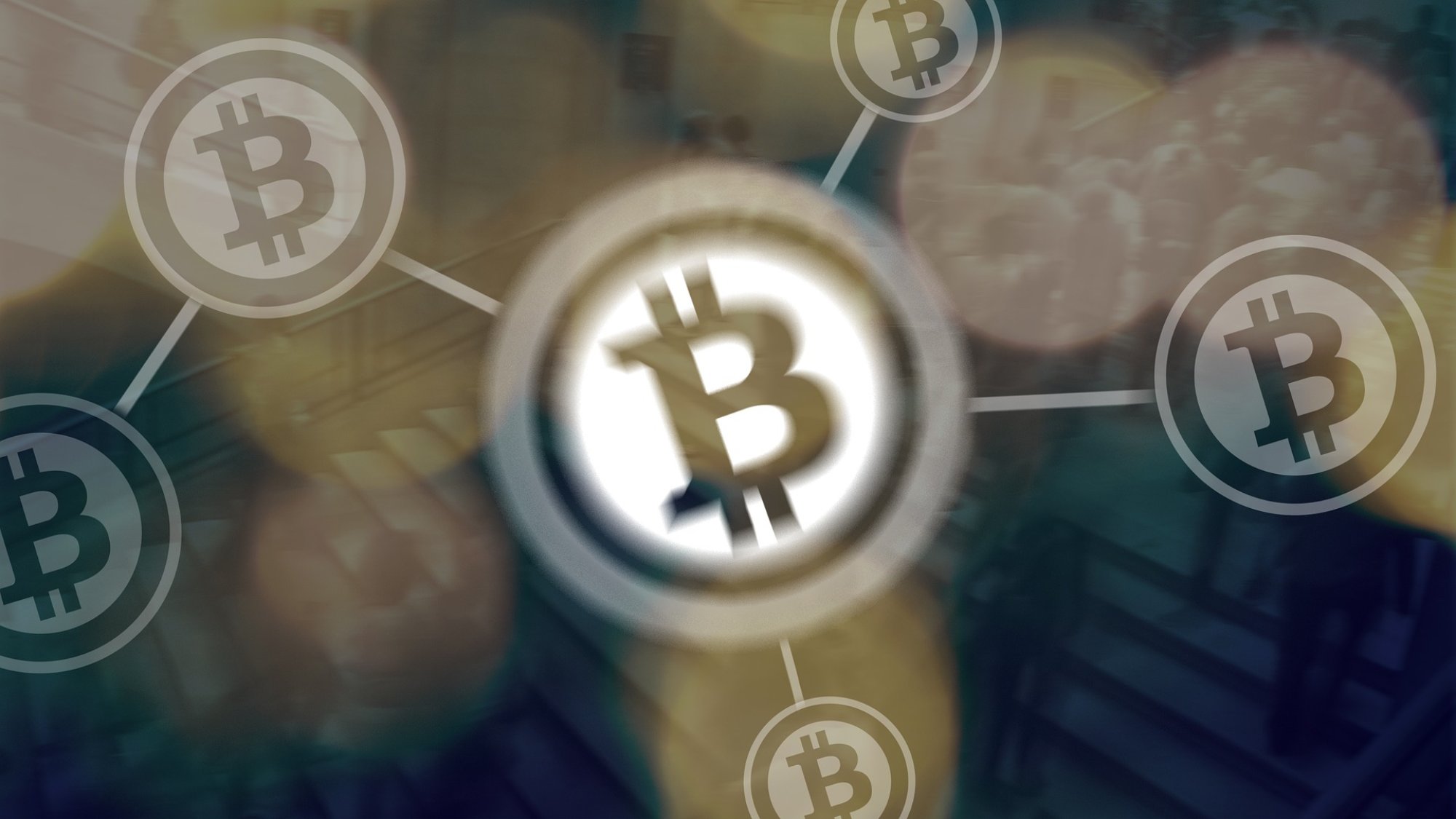 As we know, the Internet changed the world profoundly and, considering how fast it happened, dramatically. Now, there is another big breakthrough coming fast around the corner: blockchain.  I explained how blockchain technology works in an article I posted last year. Now, I would like to discuss its potential to become a universal tool offering useful applications to just about every industry and sector.

Blockchain is a universal transaction register that can record and track any operation made in it. It is distributed throughout the Internet in thousands of unmodifiable copies via a peer-to-peer model, secured with sophisticated cryptographic protocols.

It can best be compared to an accounting ledger – a publicly accessible, global book of accounts that allows users to register and view financial transactions, property deeds and contracts. The information on who has executed a given transaction is confidential, disclosed solely to its owner. The open nature of blockchain will thoroughly revamp the financial sector, with some supervisory and transactional parts of the sector becoming obsolete. Transactions and information exchanges will become more transparent, faster and significantly less expensive, significantly reducing the cost of operating the financial system throughout the world. Institutions such as banks, stock exchanges and financial brokerages already can see the incredible potential of the technology, and they also understand the threat it poses to the status quo.

One ledger to rule them all

One of the key features of blockchain technology is that every user of this “ledger” acquires access to a copy of it, and that a change made to one copy is automatically registered in all others. It is a distributed system, which means there’s no central site for data processing.

Security, which is of paramount importance in such an open system, results from the application of mathematical algorithms and cryptographic rules. Blockchain can record sale and exchange transactions, authorizations, electronic signatures and practically any operation that validates any sort of asset. 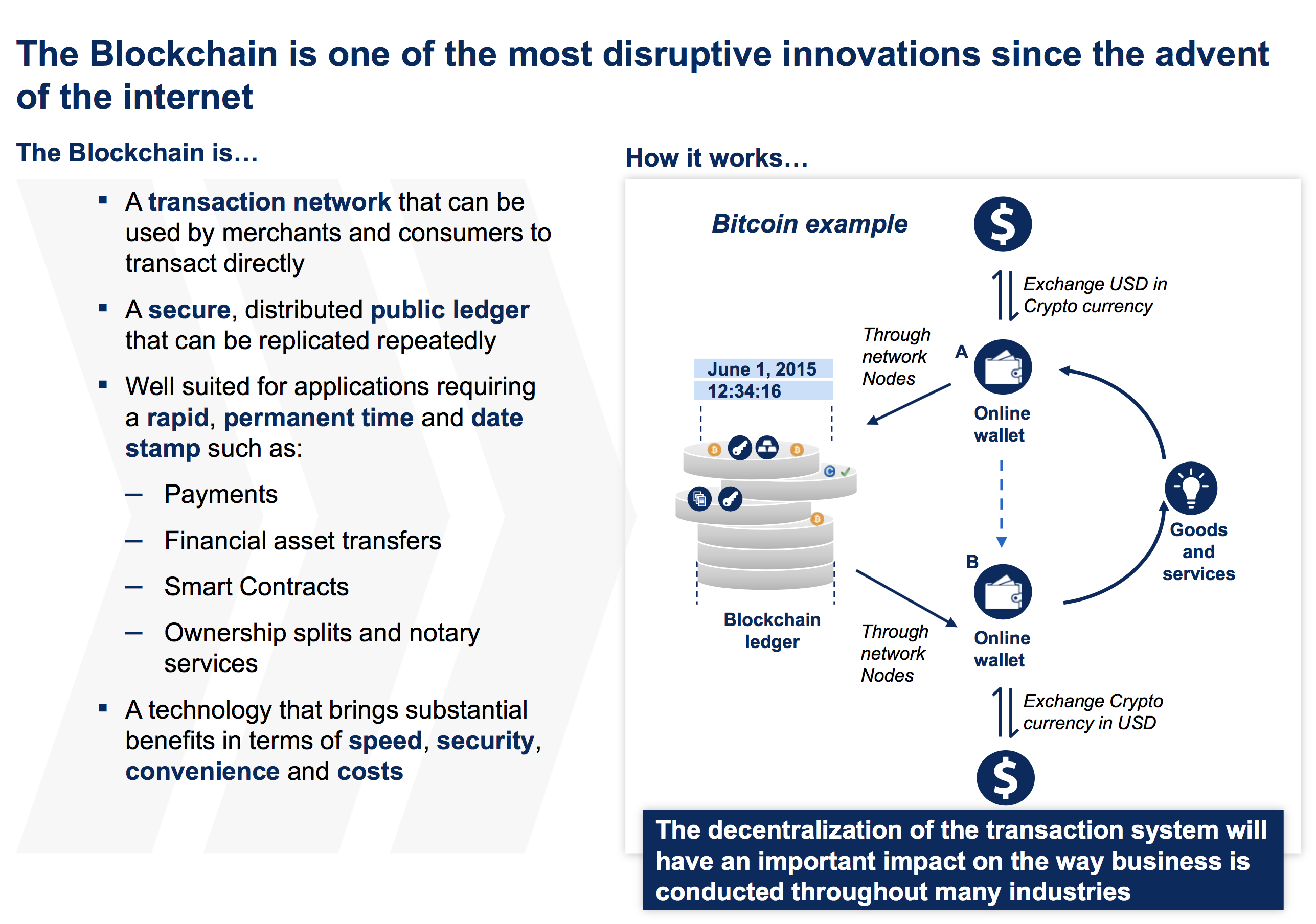 It is still about money

Experts believe that blockchain will need to be improved for another dozen or more years to become a truly global system. Today, blockchain is viewed primarily in the context of the cryptocurrency market – especially the bitcoin (BTC) – the first currency alternative to the official financial system. One could see the world of cryptocurrencies as a laboratory in which the strengths and weaknesses of the technology are tested through continuous use.

The idea of ​​a cryptocurrency as a tool independent of the central financial system aligns with technology’s (and the internet’s) foundational ethos: openness, accessibility, and anti-hierarchical. Blockchain is designed to have no profit-earning intermediaries (there are still some today, but this piece of the puzzle is expected to evolve). Ultimately, the cost of using this system may be negligible, certainly compared to the benefits this can bring to individual and business users.

Blockchain will continue to grow. But many questions arise with respect to its spread, one of them its scalability, which is potentially unlimited.

For now, the financial sector has been the fastest to take notice of blockchain’s potential benefits. However, this is only the start. Things today are comparable to the stage of development that the Internet reached in the mid- 1990s. No one then could imagine the revolutionary impact of Internet 2.0. These are still early days, but perhaps a tipping point – Blockchain 2.0 – will arrive as soon as 2019. At that time, financial institutions will unroll many blockchain-based tools. By 2025, blockchain should become as integrated into our lives as the internet is today.

Earlier this year, the McKinsey Global Institute published a report that pointed to nearly 70 businesses that have already adopted blockchain technology. Nearly all of them are either financial or insurance companies. It is the insurance industry, says the report, that will benefit the most from the breakthroughs that the new technology promises. 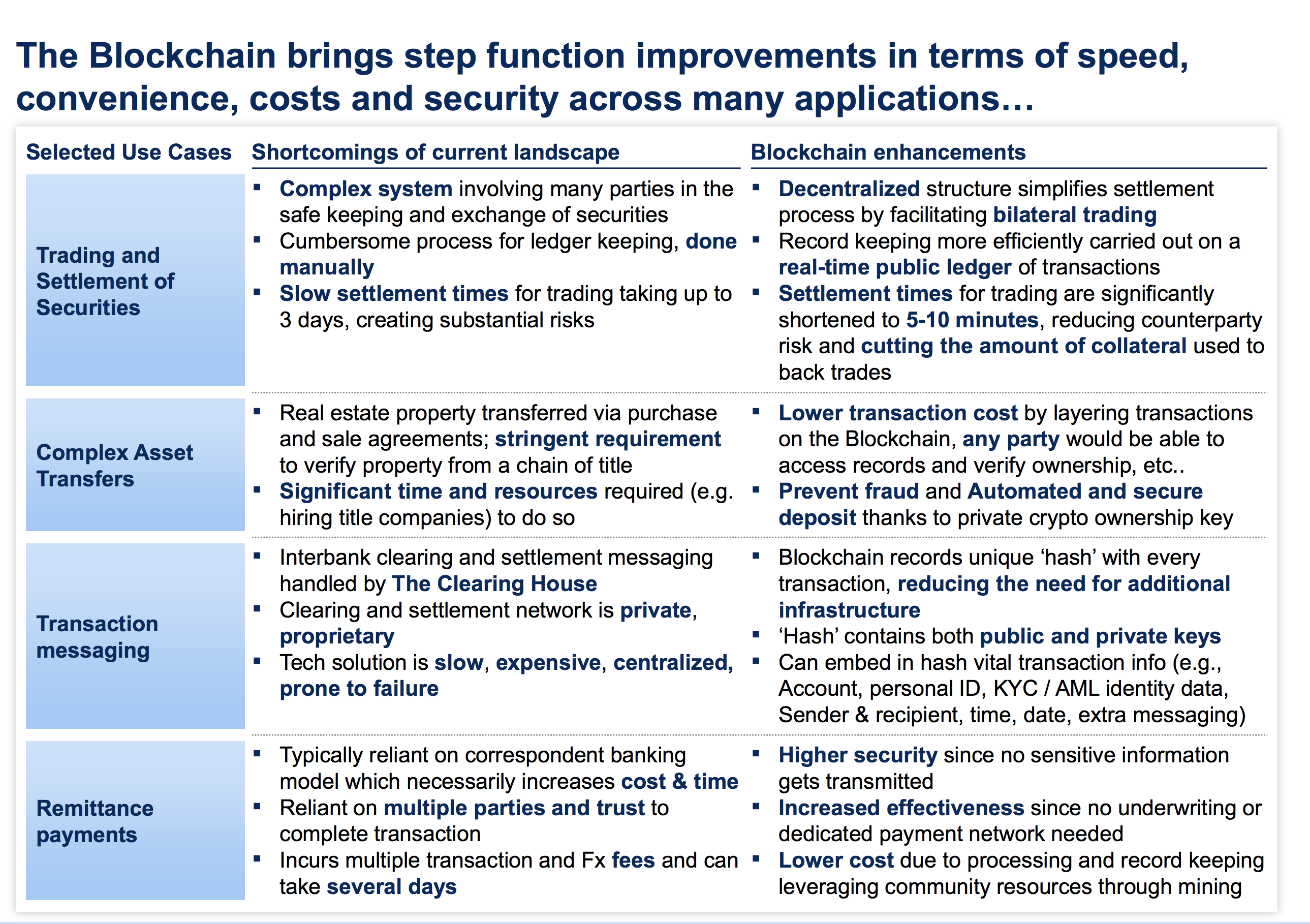 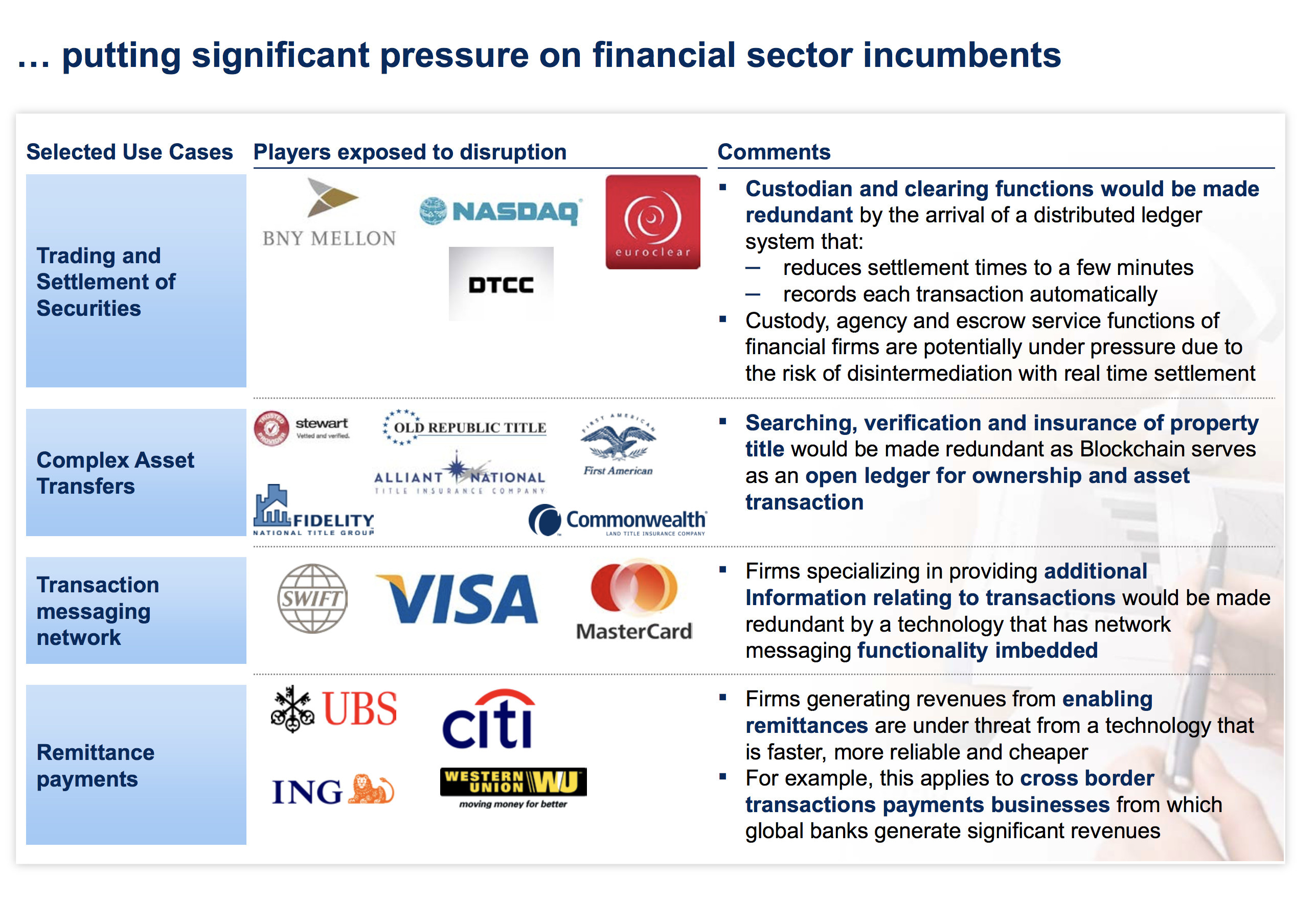 At this point I would like to point to these realms in which blockchain should become operational the soonest and work best because of its structural characteristics.

Data organization models vary in terms of the speed at which search results or other information is provided to users. In many cases, a qualitative change in the functioning of any organization, or in its competitiveness, depends on the way in which it organizes critical data. If access to such information can be improved, the entire organization’s operating model can be transformed, making the company work more efficiently. Note that decentralization and information sharing in blockchain encourages data exchange. This benefits all levels of management in any organization promoting its development.

Transparency enables technology use wherever desirable, if not absolutely required.  Hence, the organizations most interested in blockchain may be governmental entities that collect data on the functioning of public authorities and institutions. Wherever the citizenry has a right to access public information, blockchain offers a way to deliver on that promise.

3. Blockchain has an unlimited CAPACITY to process large data sets

Cloud technology currently allows the handling of trillions of bits of unintegrated data. Blockchain can combine and integrate such data in a logical way. In the Internet of Things, in which various devices rely on continuous information processing, blockchain will work perfectly. For airports, which process information on the weather, air traffic, security, time and passenger control, blockchain will be a natural ally. Similarly, smart buildings, or even entire smart cities, where sensors, software and algorithms are used to manage energy, water consumption, temperature, home appliances, television, alarms and cameras, generate huge amounts of data when connected to the internet. All these devices work together, and blockchain can improve the reliability of these interactions. Indeed, a simple application based on distributed technology may at some point be used to control every device or device set, ranging from home electronics to large fleets of autonomous vehicles.

In a sense, blockchain is a more perfect embodiment of peer-to-peer technology. It allows users to exchange files directly, thereby revolutionizing the way we will use music or video files, greatly eliminating the involvement of all the middlemen who profit by distributing content. For example, people enabled to pay for a service directly, and to exchange data strings with service providers, need not worry about extra distribution fees. Blockchain can therefore empower consumers and provide them with instant and unlimited access to services at significantly lower price points.

Access to sensitive data, such as health information, must be fully controlled. Blockchain prevents most data leakage. While it is still possible for access codes to be broken and character systems stolen (and such violations do happen), it takes enormous computing power and huge amounts of money to commit such crimes. Therefore, blockchain technology will frustrate all but the most highly-resourced hackers and criminals and offers benefits to every institution that must guarantee confidentiality to clients and/or citizens, such as hospitals and insurance companies.

Blockchain’s encryption protocols make traditional ways of exchanging content, such as email and the cloud, less attractive. The system also makes it possible to publish and keep any content completely up to date, automatically. Thus, it may change the way research institutes – which depend upon updating data continuously – function. In fact, any institution that handles invoices, documents, electronic keys, access codes or any authorization tools should be interested in blockchain technology, even if they don’t yet know it.

7. Blockchain has the potential to ERADICATE poverty and ease access to financial markets

There are still a great number of areas around the world whose residents have no access to banking. With blockchain, a person who, for physical or financial reasons, is unable to use banking services, gains a new tool and, with it, becomes an empowered consumer. Armed with a smartphone, and cryptocurrency to pay for any services, unbanked consumers can even the playing field. Plus, an institution that wishes to allocate funds for development – for instance, to a farmer, far from a bank branch, in a remote corner of the world – can do so directly and securely, no mediation required.

Is this a utopia?

The list above is only the beginning. I could point out many other industries, sectors, and social organization where blockchain would work equally well.  Admittedly, spinning out the possibilities of this distributed, secure, universally accessible and trustworthy database that is quickly becoming the world’s primary and essential ledger sounds a bit utopian. (I also admit that blockchain’s highly mathematical and algorithmic nature gives me the awesome sensation of touching the essence of technology). But I have no doubt that blockchain will bring with it internet-level improvements to all our lives, and I cannot see a downside to that. 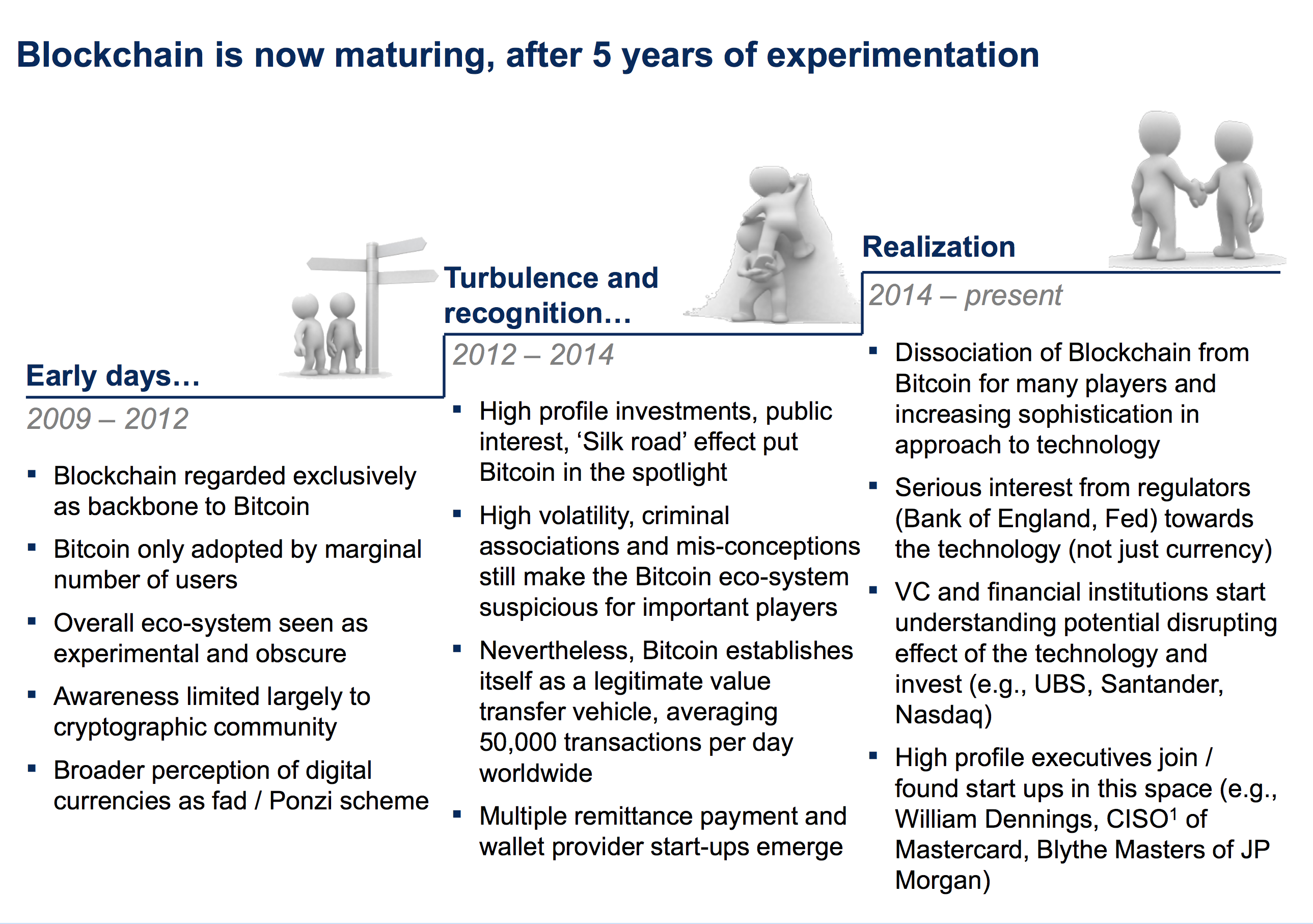 Norbert Biedrzycki asks in FORBES: When will we stop... Previous
YouTube interview: Blockchain, Artificial Intelligence,... Next 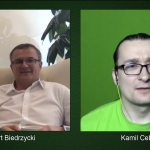